When in the Los Angeles/ Orange County area visit our retail location for your your music and fashion needs. Ipso Facto's website http://www.ipso-facto.com is the online weblair of the gothic/alternative store located at 517 N. Harbor Blvd, Fullerton CA 92832 (phone:714-525-7865).

Terri says "my dream and mission statement when I opened Ipso 30+ years ago, was to provide a Salon type atmosphere for like minded people to meet, learn, exchange ideas and accept one another's differences. Thank you for being a part of my dream and life's mission."
To that end, Ipso Facto hosts bimonthly free Salon lectures with Dr. James Rietveld on history, religion, anthropology on Tuesday evenings, plus other events throughout the year, including our annual anniversary bash featuring bands such as Spiritual Bat and Strap on Halo (2016), Sister Black (2015), Coffin Draggers (2014) Vain Machine (2013), Former Humans and D-Tox (2012), Unextraordinary Gentlemen (2011), Peeling Grey (2010), Bloodpenny (2009), The Darklings (2007), The Last Dance (2006), Faith and the Muse (2004), SEMI and Human Drama (2004), Audra (2001,2002, 2008), Voltaire (2001, 2004), Mors Syphilitica, Lovespirals (2002), Lycia and many more. In store events also include merchandise giveaways and other types of entertainment such as sideshow performer Mystic Marlow, tarot readers (Abhayada Aranya, Tiffany) belly dancers (thanks Erica Bella Sanchez, Irinxara, Saviya. Katarina!) 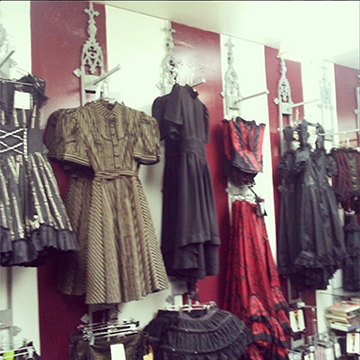 We are located at

Pen us a missive with your comments!
(Please no catalog requests or wholesale inquieries.)
ipsofacto@ipso-facto.com

Here are some anecdotal memories about Ipso Facto in no particular order:
1. Terri whacked Bob over the head with the open sign after he let too many people in for free to our poetry "Sofa Readings."
2. Terri signed the lease at the adjacent Taco Bell in October 1989. Nobody imagined that Ipso Facto would still be going strong a quarter of a century later.
3. There was NOTHING on the walls when the store first opened. Just blank space that echoed.
4. To prep for opening Terri sanded and painted the floor, but the patina treatment failed to adhere due to mastic residue, so Terri's Dad (RIP) and friend Diana Andrews helped lay the signature black and white tiles that still adorn the floor today.
5. During Terri's band practice with Stone 588 in the shop one night the bass amp rumbled so low that a wig head fell off a shelf and cracked our jewelry case glass.
6. Random ankle touching, lights flickering on by themselves, mysterious voices caught on tape, bubble wrap being dropping randomly on Terri's head, all hint at the possibility that Ipso Facto's location, built in 1919 is haunted. The OCPS investigation in January 2011 was unable to document evidence, however.
Fullerton's Haunted tour historians tell us that a little girl drowned during an infamous flood in the 20's in the riverbed that runs along the north side of our building and they think she may be responsible for the child-like ghostly antics in the building.
7. An older gentleman came in once in the early fledgling days of the shop and gave a history of the businesses that had resided in the space including an ice cream shop and Chinese restaurant called the Lotus Cafe.
8. Shadow Projekt's record signing in-store such a success (over 200 attendees) that there was a line out the door and a traffic jam on the street!
9. Terri describes how she arrived at the name Ipso Facto: The phrase "ipso facto" appeared several times as I was formulating my business plan in 1989. I heard it used in a speech by then President H.W. Bush and again in an anthropological book called "The Ethnobiology of the Hatian Zombie" on which the movie The Serpent and the Rainbow is based. I thought it was serendipity that I kept hearing the phrase in such wildly divergent ways. It occurred to me, having studied fashion design in the early 80's, that fashion is a reocurring cycle, which references previous eras, just as "ipso facto" means "of or by the fact, referring back to a previous statement." I started the shop with a view to designing and selling my own apparel, but day to day operations have left me with less time to be creative. I do make one-off accessories ranging from the prom dresses and floppy velvet hats which I made in the 90's to industrial masks and lolita headbands/ wristbands which I currently sell at the shop.
Visit Terri and Lorin's March 17, 2002 Gothic/Pagan Wedding page.
View Terri's orb image/haunted page.Also see ghost index
Visit our Facebook Group for more fun and stories!

Thanks Victoria Fashen for posting this 2017 Ipso Facto interview on your Youtube channel!

Thanks Brandon Killman of Inside Fullerton Magazine for posting this October 2017 Ipso Facto interview on your Youtube channel focusing on our Tarot offerings! 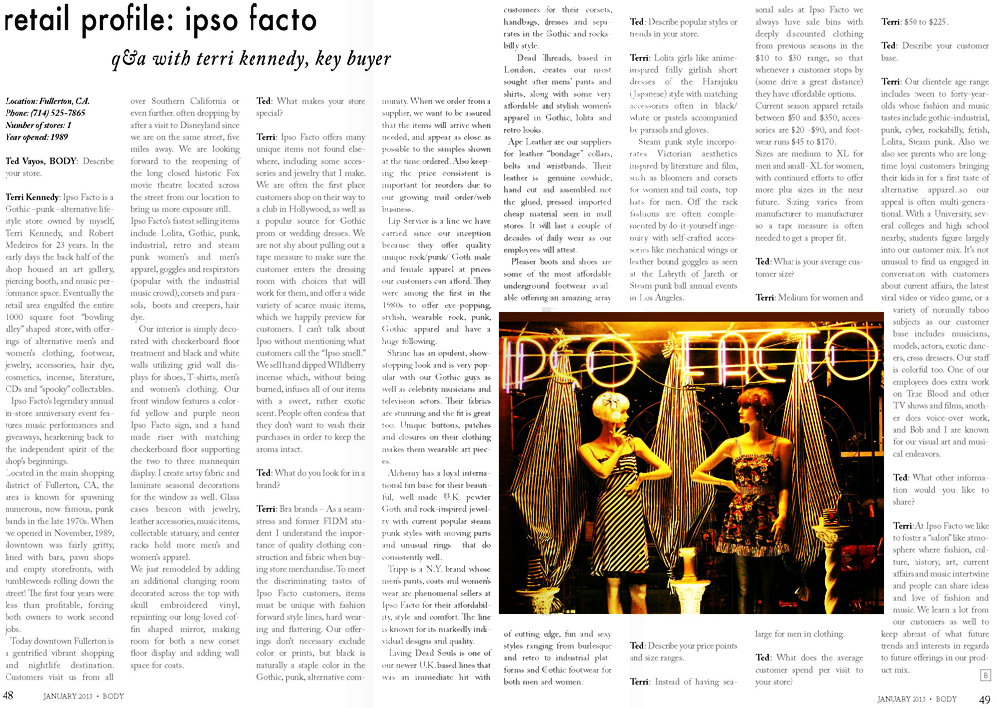